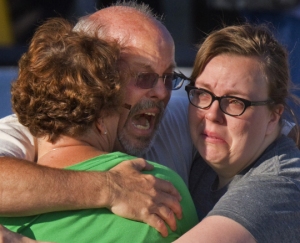 Look at this photo. This is Alex Sullivan’s family. Today is his 27th birthday. He celebrated by going to the opening of The Dark Knight Rises in Aurora, Colorado, which like Littleton (where the Columbine massacre took place) is a suburb of Denver.

Alex Sullivan’s family didn’t know when this photo was taken whether his 27th birthday will be the day he dies.  Look at the grief in their faces.  Really look at it.

This is what happens when we swallow the bullshit of the NRA and discount the paranoid reasons why someone we love thinks they need to have an arsenal of guns.  You explain to these grieving families why your right to bear arms is so damned important.  You tell them to their faces that your right to bear arms is more important than their right to life, liberty, and the pursuit of happiness with the people they loved who were gunned down at a movie theatre.  A movie theater.  It’s a place to have fun ~ not a place to get assassinated. 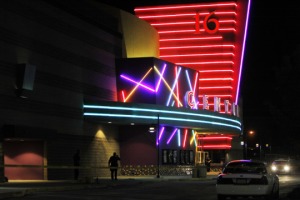 What are the odds that somebody who looks forward to the opening of a movie for months ~ stands in line to be one of the first to see it ~ is going to be assassinated by a paranoid nut job in a movie theater?

I’m not going to be surprised one bit if we hear that the prime suspect, James Eagan Holmes, experienced child abuse.  His mother wasn’t surprised to learn that her son had done this horrendously brutal, evil act.  His dad was escorted from the family home by the police.  He’s an exceptionally brilliant person with an arsenal of weapons and sophisticated booby-traps in his apartment.

Didn’t see it coming? No warning signs? My head just wants to explode when I hear this bullshit.  An arsenal of guns by definition is one hell of a warning sign that somebody has serious mental health issues.  Nobody needs an automatic rifle or whatever a gun nut uses to assassinate a dozen people and wound a few dozen more.  (Update:  The Aurora police chief reported that 71 people were shot and 12 are confirmed dead.  That’s almost 1/3 of the people in the audience.)

It is time for all of us to stop drinking the NRA Kool-Aid and wake the hell up.  If there is an arsenal of guns in your home, you need to be seriously worried.  You need to be worried about your own safety and your financial liability if the person in your home who thinks he/she needs to have all those guns decides to go on a shooting rampage.

Look again at the Sullivan family.  If someone you love shot someone they love, what would you say to them?  Then, I want you to look at this graph from the U.S. Department of Justice.  Why?  The person you may have to console is someone you love deeply because someone else you love is dead ~ shot by the gun that you allow to remain in your house.

Most people who die from gun violence know the person who shot them.  Who do you know who might shoot you?  You need to think about this the next time they go on a rant about their right to bear arms.  A lot of states have stand your ground laws which means nobody is safe in a home with a gun.

Source: US Dept of Justice

How many massacres have to take place in Colorado before the good people who live there wake the hell up?

My heart goes out to all the families who thought their loved ones were going to the movies to have a good time, but instead ended up dead or wounded because nobody who knew James Eagan Holmes reported his bizarre behavior or cared enough to recognize the warning signs.  There are always warning signs, but these tragedies happen because good people do nothing.

Update:  Alex Sullivan died celebrating his 27th birthday.  Sunday would have been his first wedding anniversary.  His bride Cassandra is now a widow.  I cannot imagine experiencing such a searing loss.  The entire country is in mourning, but the NRA was so initimidated by the power of this post that they went on an insane, inappropriate, and callously indifferent collective rant in the comment section.  ALL the families impacted by this tragedy deserve better.  The comment section is now closed because those families don’t need to read any more of the NRA’s disgusting diatribes.

Cassandra and Alex Sullivan on their wedding day, July 22, 2011

Fire in a Crowded Theater