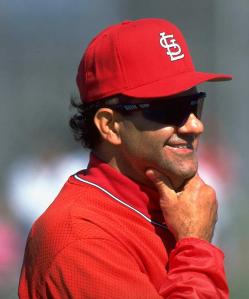 Joe Torre is famous for his baseball career ~ especially his years as the coach of the New York Yankees.  In my heart, I think of him as a St. Louis Cardinal, my hometown team.  He played at Busch Stadium, my favorite ballpark, from 1969 until 1974.  He was the Cards’ manager from 1990-1995.  He was also a player and manager for the Braves and the Mets.

Most people aren’t aware that Joe Torre’s father, a New York City cop, was abusive.  Although these childhood experiences left their scars, Mr. Torre believes they prepared him to deal effectively with Yankee owner George Steinbrenner.

You can read about Joe Torre’s childhood in Chasing the Dream:  My Lifelong Journey to the World Series and about his leadership approach in Joe Torre’s Ground Rules for Winners:  12 Keys to Managing Team Players, Tough Bosses, Setbacks, and Success. 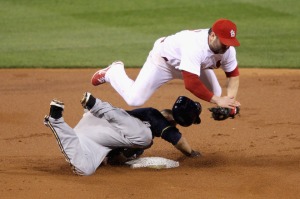 Last night the St. Louis Cardinals got one game closer to the World Series by winning 7-1 over the Milwaukee Brewers in another Suds Series for the National League championship. [Update:  The Cardinals are in the World Series!]  These photos bring back thrilling memories of Lou Brock stealing bases when he played for the Cards during my high school years.

There wasn’t much to do during St. Louis summers.  So, we were all nuts about baseball.  On game day, the area around Busch Stadium is a sea of red and white, the Cards’ colors. 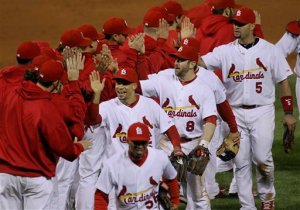 Mr. Torre was my hero on the baseball field, and I am celebrating him today because he is a strong advocate for domestic violence prevention.  He established the Safe at Home foundation and Margaret’s Place because he wants children in abusive homes to feel the same sense of security that his mother Margaret gave to him.  He tells his story on their website; baseball was a place where he could hide from his father.

On Mother’s Day, he created a video in honor of his mother for the Founding Fathers.  Mr. Torre is a member of the Founding Fathers movement which promotes the Coaching Boys Into Men media campaign and training programs.  Mr. Torre is featured in the Coaching Boys into Men playbook.  You can learn more about the program at the Futures Without Violence’s (formerly the Family Violence Prevention Fund) web site.  Mr. Torre also created a PSA for their RESPECT campaign.

He survived.  He’s thriving and has found joy.