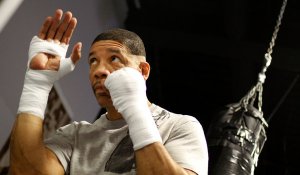 Life is a challenge.
There’s struggle and conflict.
It’s what you do with that struggle and conflict that matters.
– Dewey Bozella
Dewey Bozella spent over half his life in prison for a crime he didn’t commit.  When he was nine years old, he witnessed his father beat his pregnant mother to death.
In 1983, he was sentenced to 20 years in Sing Sing for the 1977 murder of  92-year-old Emma Crapser in Poughkeepsie, NY.  She had interrupted a burglary in progress when she came home from playing bingo at church at 11:00 PM.  After brutally beating her, the murderer suffocated her by stuffing pieces of cloth and sharp metal down her throat.

The goal wasn’t merely to survive in prison, but
to enjoy a smooth transition once in the free world.
– Dewey Bozella
Salvation in Boxing
Mr. Bozella worked hard in Sing Sing.  He fought in the boxing ring and became the prison’s light-heavyweight champion.  He fought to establish his innocence via the Innocence Project.  And, he got his GED, a bachelor’s degree from Mercy College, and a master’s from New York Theological Seminary.  He married Treena Boone in 1996.  She is a sixth-grade teacher, and the couple met while she was visiting her brother in prison.

Dewey and I will always have a special relationship.
I grew to respect him, not only for his courage in facing such grim odds, but
also for the optimism he has for his future.
– Ross Firsenbaum
Threadbare Evidence and Prosecutorial Misconduct
There was no physical evidence linking Mr. Bozella to Ms. Crasper’s murder.  In 2007, the Innocence Project referred Mr. Bozella’s case to WilmerHale, a prestigious law firm.  Ross E. Firsenbaum, a rookie associate, was intrigued with the Innocence Project and Mr. Bozella’s case.  He and his team invested 2,500 hours pro bono (billable hours worth $950,000) giving Mr. Bozella the high-powered representation indigent convicts rarely get:
Dewey’s case was personal.  Ross couldn’t just put this case down at night and go home.  Dewey’s case weighs on you, and his pro bono lawyers were probably his last hope.
The team found four critical pieces of evidence which the prosecutors had failed to disclose ~ evidence which made it “plain-as-day” that Mr. Dewey was innocent.  On October 14, 2009, NY State Supreme Court Justice James T. Rooney ruled that Mr. Bozella had been wrongfully convicted.

I could never admit to something I didn’t do.
I realized that if I was going to die in prison because of saying I’m innocent,
well that was what was going to happen.
– Dewey Bozella

Mr. Bozella was denied parole four times because he refused to admit he was guilty.  Finally, Dutchess County, NY set him free on October 28, 2009.

Today it finally ended.
– Dewey Bozella
Last night on CBS News he said:
In life, you are going to get knocked down. . .what are you going to do?
. . .Get back up and do something with yourself.

It took me six months to realize I was free.
– Dewey Bozella
Life on the Outside
On July 13, 2001, Mr. Bozella received the prestigious Arthur Ashe Courage Award at the ESPY Awards.  But, he still can’t find a job.  Why?  He was in prison.  For a crime he didn’t commit.  Mr. Firsenbaum has filed a $25 million civil lawsuit against Dutchess County for violating Mr. Bozella’s constitutional rights.
The one dream that has come true is that Mr. Bozella will step into the ring at the Staples Center in Los Angeles on Saturday night.  It will be his one and only professional bout.  [Update:  he won, and Pres. Obama called him before the fight to wish him good luck.]  He told the New York Times:
I want to go out there and give 100% and then move on with my life.  This is not a career move.  It’s a personal move and a way to let people know to never give up on their dreams.

He survived.  He’s found joy.  Hopefully, he’ll get a job soon and the State of New York will pay up.

One response to “Dewey Bozella: “Never Give Up on Your Dreams””