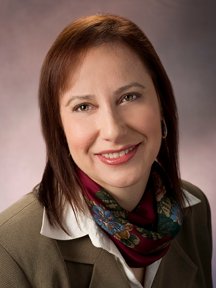 J.K. Rowling is the queen of writing a new script for her life.  While researching her story, I discovered Ruth Anne Robbins’ excellent article, “Harry Potter, Ruby Slippers and Merlin:  Telling the Client’s Story Using the Characters and Paradigms of the Archetypal Hero’s Journey” in the Seattle University Law Review.  Ms. Robbins is a law professor at Rutgers University and an expert on domestic violence.  She has supervised Rutgers’ pro bono Domestic Violence Project.

Her article provides a superb foundation for domestic violence survivors to chart a new course for our life’s journey as well as to prevail in the nightmare of litigation abuse by a pit bull abuser.  It is the perfect counterpoint to the playbook of arrogant narcissists with money and power as described in Carol Elder Bruce’s investigation into former Sen. John Eric Ensign (R-NV). 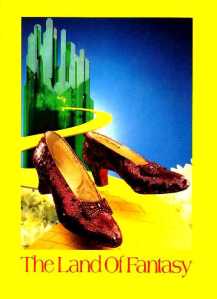 A Tornado Blasts Us from Oz and Invites Us to Chart a New Path
Child abuse, sexual assault, and domestic violence blast us off our life’s path like the proverbial tornado in the Wizard of Oz.  Many survivors become chameleons trying to adapt to a narcissist’s commands and demands until we have lost our essence.  When asked, “who are you?” we automatically respond, “who do you want me to be?”  We play our assigned roles and sublimate being the director of our lives in order to survive.
This path is not sustainable.  It’s exhausting.  It’s mind-numbing.  It’s degrading.  It erases our right to be.  Eventually, we are “invited” by default (shit happens) or design (a new goal) to embark on a heroine’s journey to become empowered. 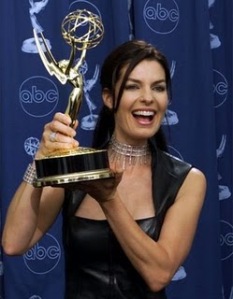 Select a Talisman
Before we launch our journey, we will select or receive a talisman ~ our own ruby slippers.  A talisman is a good luck charm ~ an amulet ~ something that averts evil and brings good fortune.  It is a symbol we hold in our heads and hearts as we set out on our adventure to reclaim our soul.
Sela Ward’s role of Teddy in Sisters, for example, inspired her write a new script for her life and to take her rightful place in the director’s chair.  Eve Ensler went on a quest to find Mr. Alligator.

Cast Yourself in the Role of Heroine

Victims aren’t heroes, and heroes aren’t victims.  Most of us have been conditioned to play the role of damsel in distress.  Since most of us aren’t Snow White, this role tends to not end “happily ever after” in real life.

If you feel like you’ve been the world’s doormat, you might want to start by putting a drawbridge outside your front door: 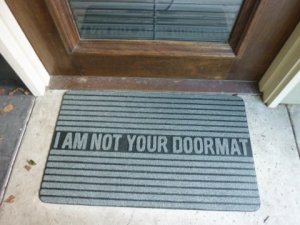 As our life’s journey unfolds, we may be called to play each type of heroine.  If you are struggling with your first casting decision, you may find inspiration in the lives of survivors who have become heroes and heroines. 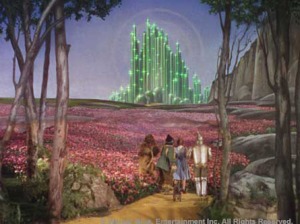 All life stories entail epic struggles and growth.  Good storytellers tend to use familiar metaphors and symbols from religious texts, mythology, or classic literature.  These storylines work because they reside in our collective unconscious ~ the predictable patterns of our lives.  We all learn from stories.  Ms. Robbins describes the role of the hero:

. . .the hero is the person in the story with whom the reader most closely identifies. . .universal qualities and emotions that most readers have either experienced or understand.  A hero grows and changes through the course of the journey.  . .heroes start out as somehow flawed at a fundamental level that affects their daily life and/or prevents them from living up to their potential.  The hero, then, represents a search for identity and wholeness. . .A hero is imperfect by definition, and audiences admire the hero all the more for striving to overcome these flaws.

A heroine’s journey has three stages.  The first is departure on the adventure.  Along the way, the heroine is tested and taught how to overcome life’s challenges.  Gatekeepers, threshold guardians, and villains try to block the heroine’s progress.  Spiritual guides and mentors appear to offer wisdom or a talisman.  Companions offer comfort.  All of these characters ~ positively or negatively ~ teach the heroine to conquer her fears so that she can complete her ultimate test:  slaying the dragon.  The heroine finally is ready to return home ~ older and wiser. 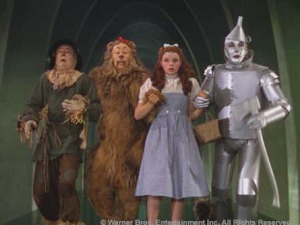 Assemble Your Supporting Cast of Characters

Dorothy was accompanied on her journey by the Scarecrow, Lion, and Tin Man.  While each of these characters had a goal, the focus of the story was on Dorothy’s journey down the yellow brick road ~ she was the heroine.

Our cast of characters may include a mentor (guide), companion (fellow seeker), gatekeeper (the person who tests the hero by creating opportunities and challenges), dragon (unfortunate events or villains), shape-shifter (a Jekyll and Hyde abusive person), and narrator (the person who tells our story to others).

Ms. Robbins believes clients involved in litigation must be cast as hero.  Their attorney is the narrator, and the judge becomes the heroine’s mentor.  Her analysis is equally valuable in litigation and in life:

The most important casting decisions. . .are. . .the client and the judge. . .a lawyer can assign only one hero. . .this must be the client. . .The lawyer. . .may play only the role of an outside narrator. . .

. . .another narrator, the opposing counsel, is also trying to tell heroic tales. . .

How do we make the domestic violence plaintiff look like a hero, especially if she acted imperfectly herself. . .placing the plaintiff in a “victim” role. . .the damsel-in-distress rather than as the hero. . .awards the role of hero to the judge, whose job it becomes to save the damsel from her distress.  However, a hero will save only a true and pure damsel and not one who shows herself to have impurities. . .a judge cast in the role of hero may conclude that the client is no true damsel who deserves saving. . .[emphasis added]

Casting the client as the main character and hero of the lawsuit gives the client permission to be imperfect.  In fact, heroes must be imperfect in order to have the audience identify with them and with their need to embark on or continue on their transformative journeys. . .The character flaw does not ultimately define a hero. . .the hero is allowed to have that flaw at least at the outset.

. . .A person seeking a domestic violence protective order is, in a very real way, seeking freedom from the lethal form of love. . .The legal system. . .grants them the renewed opportunity to find bliss. . .She is deserving of love. . .she is not being loved.  Accordingly, her journey is towards the freedom to be herself in a safer place, where she can receive the love that she deserves. 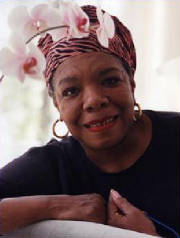 All Women Are Phenomenal
Maya Angelou reminds us that all women are phenomenal.  Most of us are master jugglers of heroic roles.  We are creators.  We are nurturers.  We are warriors.  We are mentors.  We are worthy of protection.
Ms. Angelou has been a sage mentor to millions of women ~ including Oprah.  Ms. Robbins advocates casting the judge in the role of mentor:
. . .The mentor is a former hero who now serves as the sage advice-giver to the next hero. . .Merlin. . .Professor Dumbledore. . .Obi-Wan Kenobi, Cinderella’s Fairy Godmother, or Dorothy’s Glinda [the good witch]. . .the mentor teaches and tests the hero and offers the gift of an amulet or talisman needed to help conquer the so-called villain or dragon.
. . .the judge. . .provides the hero with the mentoring lessons [scholar or magician heroes] needed to allow the hero to move forward. . .allows the judge to symbolically and literally deliver a talisman to the client in the form of a judgment and opinion [or order of protection]. . .the symbolic gifts must be earned by the hero by demonstrating the learned lesson of commitment. . .the judge’s favorable ruling gives the client something that will help the client continue on the journey of transformation.  [emphasis added] 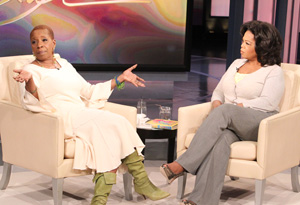 Spiritual Guides and Mentors
A heroine’s journey would be too terrifying without the companionship of spiritual guides and mentors.  We need their wisdom and support as we face the myriad challenges and tests that help us become the heroines of our own lives.
Iyanla Vanzant was my spiritual guide through the valley.  Her books inspired and guided me on my quest to be free.

Gloria Steinem taught me that books can be mentors and friends when we’re feeling abandoned, terrified, and alone. 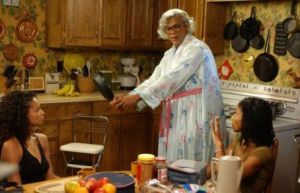 And, Tyler Perry infused my spine with steel with a brilliant blend of humor and wisdom. 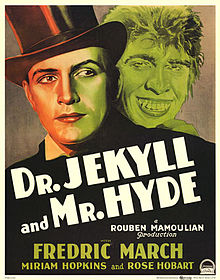 Villains, Shadows, Shape-Shifters, and Dragons
Our ultimate challenge on the road to becoming a heroine is confronting and conquering evil ~ slaying the dragon.  Our transformation will not be complete until we do.  So, we need to summon our courage.
Villains and shadows can be other people and/or our own demons.  In many respects, the two are intricately intertwined.  Most addictions ~ alcohol, drugs, shopping, work, gambling ~ are an escape from the domination and control of narcissists, bullies, and jerks.  In life and in law,extricating ourselves can be tricky ~ narcissists are adept at deflecting dark motives and behavior onto an innocent person:
. . .the lawyer should be careful about default casting the opposing party as the dragon.  Dragons are also potentially heroes, if viewed from the opposite point of view.  [Whether you call someone a hero or a monster is all relative.]. . .the hero. . .can instead deteriorate and become a tyrant.  A tyrant is a hero who has gone astray. . .casting the opposing party as “villain” risks giving the opposing party an opening to reverse the logic and to make the hero look like the actual villain. . .
A better choice for the opposing party. . .role of threshold guardian. . .gatekeepers. . .lesser antagonists. . .they function to test the hero. . .Often, the best way to thwart a threshold guardian is not to challenge it head-on, but rather to go around it. . .the hero can gain valuable insight about turning adversity into an advantage.
. . .the client’s quest is larger than the lawsuit. . .the lawsuit is merely one early test either along the road of trials or at the threshold to the new world.
Every survivor of abuse is intimately familiar with the crazy-making behavior of a narcissistic shape-shifter:
. . .shape-shifters are elusive and unstable. . .fickle or mood-changing personality. . .negative influence. . .Too often. . .female roles in stories are limited to pure and chaste maidens or femmes fatales/witches. . .
A shape-shifter cannot be trusted. . .must also possess some good qualities in order to succeed in duping the hero. . .In a domestic violence case. . .a lawyer representing the plaintiff may choose to cast the male defendant as a shape-shifter. . .someone who changed his personality from loving to violent. . .easy explanation for why the hero-client fell in love. . . 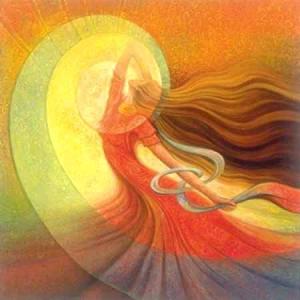 Heroine and Director of Your Life
Ms. Robbins’ brilliant analysis and lessons on great storytelling present us with a phenomenal playbook in life and in litigation.  We’re often told that we need to become the directors of our lives, but this can feel like a challenge that is too daunting for someone living in the quagmire of abuse.
We often get so caught up in winning the battle with our abuser that we forget the true path to victory is empowerment.
We deserve to be loved.  We deserve to be the heroines and directors of our lives.

One response to “Empowered Woman’s Playbook: Casting Yourself as Heroine”