This is the iconic tourist photo of the Edmonds ferry.  The fish, of course, are salmon.  Their fins are forks. 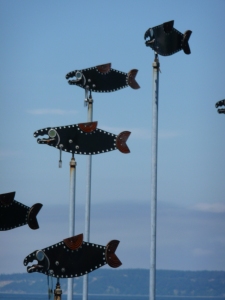 As you probably know, tides rise and fall with the phases of the moon.  Each summer we are blessed with an extreme low tide ~ the lowest tide of the season.  This is when everyone can see the underwater creatures that reside in Edmonds’ underwater park.  We get to see what scuba divers from around the world come to see. 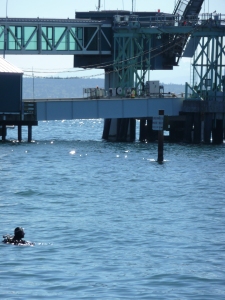 This photo was taken at one of the summer’s highest tides at the ferry dock.  The next one is at extreme low tide.  The diver is swimming in water about 13 feet deep.

I love visiting the star fish that reside on the pylons underneath the ferry dock.  The first extreme low tide I experienced in Puget Sound was amazing to this Midwestern girl.  I saw over 14 starfish in a rainbow of colors on one pylon.  This year they were almost all purple, and I doubt there are 14 total in this photo.

I was blessed that first year to see a moon snail.  Here’s one in a bed of kelp.

When I first walked the Puget Sound beaches, I thought their nests were trash that had swept in from the Pacific Ocean.  The nests look a little bit like a small tire.   This one is hiding under the kelp.

The underwater park is home to many other sea creatures that live in the rocks of the pier.   That’s Whidbey Island in the background. 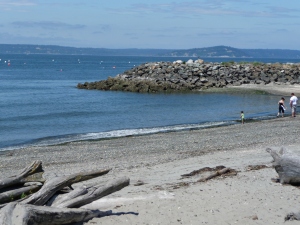 My favorite are the sea anemones which close up when they are dry.

The beach rangers have a small aquarium so people can see what they look like when the tide is high. 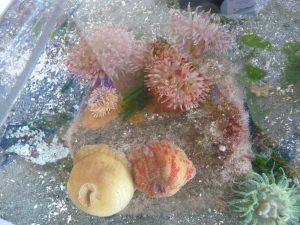 Kelp comes in a wide array of shapes and colors.  On a hot day, it can get pretty stinky. 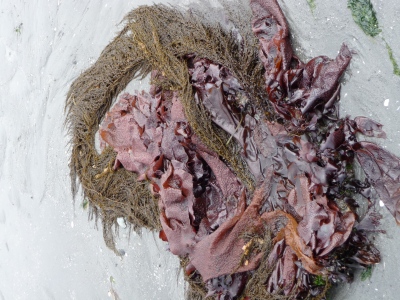 I joked with the beach ranger that the seagulls were having themselves a feast ~ like Thanksgiving Day.

She laughed and said I should wait around until the tide came back in.  The seagulls would look like old men in their recliners after Thanksgiving dinner.  I howled when I saw them lounging on the beach.  They were all so stuffed that they didn’t even think about flying off.   I think these guys are wishing they hadn’t eaten that third crab.

I love the shape of the purple martin houses.

The seabird at the top of the pole is a cormorant according to the beach ranger.  The dictionary says they have long necks.  Hmmm.

I was standing beneath these poles when I took these photos.  In the next one, you can see that at high tide the water is 13 feet deep and the martin houses are barely visible.  My camera has a 10x zoom lens.  The mountains in the background are the Olympics on the Kitsap Peninsula.  Forks, the home of the Twilight series is on the other side of the mountains on the Pacific Ocean.

There are no boat ramps in Edmonds.  Boats are put in a sling to be hoisted into and out of the water.

In Edmonds, the greatest crime is to have ugly flowers.  The city has made tremendous cut-backs to services, but the planters along the waterfront are still packed with gorgeous flowers.  These are outside Anthony’s Restaurant and the old Edmonds Yacht Club.  It’s a very popular place to have lunch because Anthony’s has outdoor tables.

What’s not to love about this?  Sailboats and flowers!

I hope you enjoyed this trip to the beach!