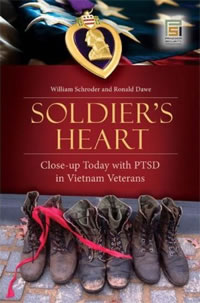 “Soldier’s Heart” was coined after the Civil War to describe what is now diagnosed as post traumatic stress disorder or PTSD.  The authors of Soldier’s Heart are Vietnam veterans who suffer from PTSD.  William Schroder is a writer, and Dr. Ronald Dawe is a psychologist who specializes in the connection between PTSD and substance abuse.  They decided to talk to other veterans with PTSD in order to try to better understand their own symptoms and experiences.

Soldier’s Heart:  Close-up Today with PTSD in Vietnam Veterans was recommended to me at the Field’s End Writers’ Conference.  I decided to read it because viable treatment protocols for PTSD will most likely arise from the military.  The book is expensive:  $49.95.  I was lucky our library system had a copy.

If you are a veteran or are concerned about a veteran with PTSD, the soldiers’ stories will give you a candid glimpse into life in a combat zone.  Dr. Dawe inserted diagnostic explanations into each soldier’s story.  I will be focusing this review on what I learned about PTSD. 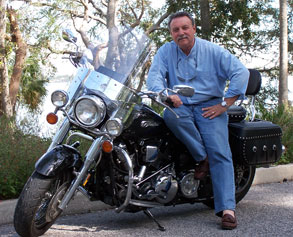 Although there are more soldiers’ stories in the book, these stories reflect the essential elements of PTSD.  I was stunned to discover that PTSD causes us to have difficulties in forming and maintaining relationships.  And, I was blown away to learn that we do not develop a hard shell to protect ourselves.  We’re as vulnerable as a turtle deprived of its shell.

The most important thing all of us need to take away from this book is that PTSD causes permanent brain damage.  The wounds are inside where they can’t be seen with the naked eye.  We are as disabled as those with visible physical wounds.  But, we will have to fight harder to get rehabilitation treatment.

I was shocked to read at the end of the book that Freud first noticed PTSD in his patients who had experienced child abuse and molestation.  He abandoned his theories, however, because he didn’t want to offend the wealthy parents who were picking up the therapy tab.  The DSM on PTSD was developed to diagnose battered women.  It was extended to cover veterans.

This doesn’t surprise me because those of us who have experienced domestic violence in its many guises are veterans.  Our homes are not peaceful.  They are like living in a war zone.  The terrorists who threaten to kill us aren’t strangers.  We know them intimately.

Soldier’s Heart exposes the horrors of war and dispels any romantic, heroic notions about war.  I think it should be required reading for anyone thinking about enlisting in the military as well as their families.  I skimmed most of the veteran’s stories ~ the details were too brutal for me.  I read enough, however, to become even more strident about world peace.