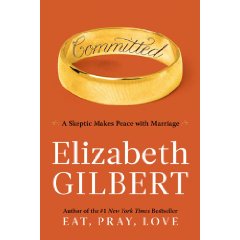 Committed:  A Skeptic Makes Peace with Marriage is the natural sequel to Elizabeth Gilbert’s perenially best-selling Eat, Pray, Love:  One Woman’s Search for Everything Across Italy, India and Indonesia.

Eat, Pray, Love is about the path she took to recover from her divorce.  Ms. Gilbert’s fans were delighted to learn she’d met “Felipe,” a dashing Brazilian gemstone importer.  He too was left broke and broken after his divorce.  Her feelings in Committed are expressed candidly:

. . .divorce is a psychological and emotional and economic wrecking ball. . .

I will do virtually anything to avoid going through that apocalypse again. . .

Maybe the only difference between first marriage and second marriage is that the second time at least you know you are gambling.

“Felipe” visited her in the United States for a couple of years in 90-day increments ~ the length of a visa.

The arrangement worked quite well for the couple until “Felipe” was prevented from entering the United States by a Homeland Security officer at the Dallas airport.  Essentially, INS got out the shotgun and told them to marry if they wanted to live together. 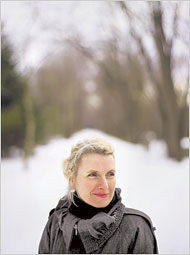 Eat, Pray, Love wasn’t yet a best-selling book.  “Felipe” couldn’t work as a gemstone importer because his inventory was in a warehouse in the U.S.  Ms. Gilbert had been working on a book about the Amazon.  The couple decided to meet in Southeast Asia because it would be a cheap place to travel and live.  They spent most of 2006 caught up in the frustrating task of dealing with government agencies to secure a new visa for “Felipe.”  It boiled over during an arduous bus ride:

They put me in jail and threw me out of your country.  Thirty years of traveling, and I’ve never had a border closed to me before, and now I can’t get into the United States of America ~ of all bloody places to get kicked out of!  In the past I would’ve just said, “The hell with it,” and moved on, but I can’t ~ because America is where you want to live, and I want to be with you.  So I have no choice.  I have to put up with all this shit, and I have to turn my entire private life over to these bureaucrats and to your police, and it’s humiliating.  . .We’re just numbers on a civil servant’s desk.  Meanwhile, my business is dying and I’m going broke.  So of course I’m miserable.  And now you’re dragging me all over goddamn Southeast Asia on these goddamn buses~

Committed is about the couple’s struggles with these agencies as well as their quest to deal with their mutual aversion to marriage.  Ms. Gilbert’s solution was to contemplate and research marriage:

This entire book. . .has been an effort to search through the complex history of Western marriage until I could find some small place of comfort in there for myself. . .

The leap into marriage has not come easily for me, but perhaps it shouldn’t be easy. . .matrimony has not always treated women kindly. . .

Real, sane, mature love. . .is not based on infatuation but on affection and respect. . .you can actually see the person who is standing next to you, something you absolutely cannot do from within the swirling mists of romantic delusion. . .When the dust has settled. . .”What was I thinking?”. . .You weren’t.

. . .as I near the age of forty.  I can no longer do infatuation.  It kills me. . .puts me through the wood chipper. . .For me, infatuation has only ever done one thing:  It destroys, and generally pretty fast. . .

I sought passion everywhere.  I freebased it.

She read voraciously and interviewed everyone she met from family members to grannies in Vietnam.  She looks at the history of marriage from the early days of the Greeks and Romans when it was common for men to marry each other to her own ancestral history of marriage.  She studies shifting religious and political views of marriage as a pragmatic merger to a loving union:

Marriages based on a traditional, restrictive sense about a woman’s place in the home tend to be less strong and less happy than marriages where the man and the woman regard each other as equals, and where the husband particpates in more tradtionally female and thankless household chores.

And, she shares how all this intellectual digging gets woven into her own attitudes and views about marriage.  I was quite delighted that she distilled all this complexity and dry-as-dust research into a compelling book that reads like a very long letter about marriage to a dear friend.  I was enlightened, for example, to read:

. . .for approximately ten centuries, Christianity itself did not see marriage as being either holy or sanctified.

. . .powerful entitites across the ages have always tried to undercut natural human bonds in order to increase their own power.

Yet, the power of love and the desire for intimacy prevails.  American slaves found a way to marry.  Intimacy flourishes when couples have the luxury of privacy:

. . .you cannot stop people from wanting what they want, and a lot of people. . .want intimacy. . .people tend to push back very hard against anybody or anything that interferes with the simple desire to be left alone with a loved one. . .right to link ourselves up to another soul legally, emotionally, physically, materially. . .

On January 18, 2007, “Felipe” presented his case at the U.S. Consultate in Sydney.  He left a free man and flew home to Elizabeth.  They were married in their home in New Jersey on a Sunday afternoon in Feburary, 2007.

I loved the book and recommend it highly for anyone who desires a mature, enduring relationship filled with intimacy and unconditional love.  The book is loaded with thought-provoking tidbits that could spark interesting conversation and dialogue about marriage with the person you love.

My greatest disappointment about the book is that there are no photos.

The New York Times Book Review section will have a front-page review of Committed on Sunday.  Sam Tanenhaus, the Book Review editor, conducted an interview with Ms. Gilbert which you can watch here and listen to here.

You can learn when Elizabeth Gilbert will be at an event near you by clicking here.