A brave rape victim confronted Sen. David Vitter (R-LA) on Halloween (10/31/09) and asked the questions many of us ask after meeting with callous indifference regarding violence against women.

I think people’s biggest frustration is that they think they’re being shut out of the debate and they just aren’t heard in Washington.

Yet, when one of his consituents ~ the rape survivor ~ confronted him after the meeting regarding his vote against protecting defense-contract employees from rape, he ran away like a coward.  It was all caught on tape by Kevin Francks:

Sen. Vitter did not appear to give this rape survivor the time of day.  I doubt he would have turned his back if she had been a representative of Halliburton.

When he was CEO of Halliburton, former V.P. Dick Cheney decided employees would be forced to sign employment contracts limiting their recourse to arbitration.  Halliburton owned KBR which has defense contracts in Iraq.  On July 21, 2005, Jamie Leigh Jones, a young administrative assistant with KBR left for an assignment in Baghdad, Iraq.  One week later, after complaining of sexual harassment, she was allegedly given a date rape drug and vaginally and anally gang-raped by seven KBR employees while she was unconscious.

After being raped, Ms. Jones was held prisoner in a shipping container and denied food, water, and medical treatment.  After a day in captivity, she was able to borrow a cell phone to call her father in Texas.  He contacted their Congressman Ted Poe (R-TX), who brought in the State Department.  The U.S. Embassy in Baghdad secured her release.

U.S. Army physician Jodi Schultz administered a rape kit.  The evidence was given to KBR/Halliburton security personnel who “lost” it for two years.  When it was recovered by the State Department, Dr. Schultz’ notes and photographs were missing.

The U.S. Department of Justice (DoJ), under the Bush Administration, failed to prosecute Ms. Jones’ alleged rapists.  After she filed suit against KBR/Halliburton, they argued she was limited to the arbitration process.  Four years after the alleged rape, the Fifth Circuit Court of Appeals decided she could finally have her day in court.  After Ms. Jones’ testimony before Congress on December 19, 2007, Congressman Robert Scott (D-VA) observed that the DoJ:

. . .can enforce [criminal laws] with respect to contractors who commit crimes abroad, but it chooses not to.

. . .seems to be taking action with respect to enforcement of criminal laws in Iraq only when it is forced to do something by embarrassing media coverage. 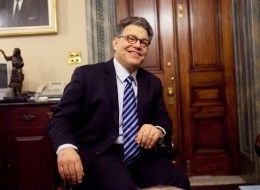 Sen. Al Franken (D-MN) stepped up to the plate.  He successfully championed an amendment to the 2010 Defense Appropriations Bill which prohibits federal funding to defense contractors like Halliburton which use mandatory aribitration clauses to deny victims of sexual assault their day in court.  Ms. Jones testified before the Senate Judiciary Committee on October 7, 2009.  The amendment was Sen. Franken’s first piece of legislation:

One of the things I campaigned on is the fact that we haven’t done oversight on our contractors.  Part of the job of Congress is to do oversight which we really didn’t do it, expecially from 2001 to 2007.  It was actually almost criminal that we didn’t do it on our contractors in Iraq because there was all this money that was wasted and lost on fraud and abuse.  It was totally incompetent and it contributed to the collapse of the country because the reconstruction was done so wrong.

The amendment passed with a vote of 68-30.  The 30 Republicans ~ including Sen. Vitter ~ who voted against the amendment are all-white and all-male.  The Defense Department opposed the amendment as did President Obama.  Their excuses aren’t passing muster with bloggers.

You can find the names and photos of the 30 men who voted for rape at RepublicansforRape.org.

It took a lot of courage for that rape survivor to confront a powerful U.S. Senator.  Bravo!