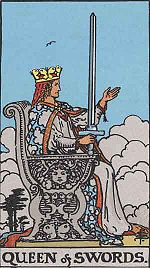 In the midst of a PTSD episode, we often feel abject powerlessness.  Everyone seems to have control of our destiny but us.  How do we effectively ask for help. . .especially when our life’s pattern is that nobody shows up?

Last week I was at a domestic violence event.  The host remarked about human nature:  people will abdicate their responsibility to render assistance unless they believe we might perish absent their swift intervention.  It sent a chill down my back.

So, what do we do to motivate folks to step up to the plate when our lives are in crisis?

My therapist Kate has an amazingly extensive bag of tricks.  For example, she can glide effortlessly from uber-intellectual concept to tarot cards to make a point.

She suggested I approach folks within the system who are being paid to help me like the Queen of Swords.  Huh?

Look at the card.  You probably didn’t know that tarot cards were devised to keep religious messages alive for illiterate people during various periods of religious persecution.  Each card is all about faith and empowerment.

The Queen of Swords conveys one of four aspects of a fully empowered woman.  She wields a sword with one hand while her other hand beckons.

I still didn’t get it.  So, Kate got down and dirty with hand gestures and a wicked smile on her face:

You swing the sword around in the air to terrify the hell out of them.  At the same time, you tickle their balls like a seductress.  They won’t know what hit them.  A part of them will be terrified of you and the other part will be drawn into your realm.

Quite frankly, I thought she was a bit crazy or nuts.  But, I tried it.  And, it worked like a charm.

Recommended reading:  Mama Gena’s School of Womanly Arts:  Using the Power of Pleasure to Have Your Way with the World by Regena Thomashauer

4 responses to “Kate’s Couch Session Two: Are You a Queen?”