Tyler Perry is having a grand celebration for his 40th birthday.  I Can Do Bad All by Myself, his latest Madea movie, opened at number one at the box office on Friday.  The movie is based on his play “Dear God, are all men dogs?”  On Saturday, he celebrated his birthday with Oprah, Sherri Shepherd, and Mary J. Blige.  His next movie, Precious, premiered at the Toronto Film Festival on Sunday.  On Twitter today he said to his fans:

Today I turn 40 and I enter it with so much to be grateful for.  You’ve given me the best years of my life.  Again, all I can say is thank you, and that’s not enough.

His birthday wish (see note below):

If I could give my mother her health and strength I would.  That would be the ultimate birthday gift, and only God can grant that.  So I ask that you will continue to pray for her and continue to pray that her spirits be lifted and encouraged.

To celebrate Tyler Perry’s birthday, I treated myself to I Can Do Bad All by Myself.  I loved it!  I wanted to stay at the theater and watch it again, but Oprah’s  24th season started this afternoon with an interview with Whitney Houston that I didn’t want to miss.  I wasn’t surprised that Oprah had difficulty saying the words “domestic violence” during the interview.  She characterized the marriage of Whitney Houston and Bobby Brown as “tumultuous.”

Breaking Down the Walls of Silence

Tyler Perry, on the other hand, doesn’t have any problem breaking down the walls of silence.  In fact, he has Sandino, the Colombian handyman (Adam Rodriguez), get out a baseball bat to prevent sexual molestation of 16-year-old Jennifer (Hope Olaide Wilson) by her aunt April’s (Taraji P. Henson) married, abusive boyfriend Raymond (Brian White).  In another scene, Sandino advises April  that she can’t heal from her own experiences of sexual molestation until she stops covering it up.  Good advice.

The message was especially powerful for me today because I’ve been silent for decades about my own sexual molestation by my uncle.  I’ve been in PTSD hell for over a week with flashbacks and nightmares because nobody protected me.

The film’s message and music spoke to my soul and provided healing.  Mary J. Blige, Gladys Knight, and Pastor Marvin Winans sang to my heart ~ their songs were beyond moving especially the lyrics, “oh Lord I want you to help me, help me on my journey help me on my way.”

One of my favorite scenes was Madea sitting on the porch telling Bible stories to Jennifer.  It was classic Madea and hysterically funny ~ the audience howled with belly-shaking laughter.  Nobody in their right mind messes with Madea, but Madea certainly messed up the parables.

Courtney Young, who is promoting her own feminist agenda, blasted the film:

The crux of Perry’s gender problem lies in his reliance on conservative gender politics that eschew a more progressive, inclusive agenda.  Each of his films advances nearly the same message to his audience (which is overwhelmingly African-American, female, devoutly Christian and over 30).  Be demure.  Be strong but not too strong.  Too much ambition is a detriment to your ability to find a partner and spiritual health.  Female beauty can be dangerous.  Let a man be a “man.”  True female fulfillment is found in the role of wife and/or mother.

Oh, please!  She knows better.  In an interview with CNN, Tyler Perry explains why the critics (who don’t get invited to screenings of his movies) get it wrong:

I’m telling you, just to think this little boy from Louisiana can do it , anybody can do it.

He loves to leave the folks in Hollywood scratching their heads about how he does it.  He has humility, faith, talent, and gratitude ~ he told his fans today on Twitter: 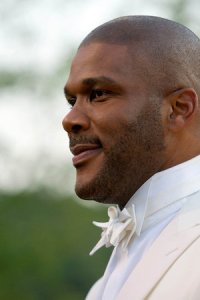 On October 4, 2008, Tyler Perry opened his studio at an abandoned Delta Airlines reservation center in Atlanta.  The complex covers 30 acres including a 200,000 square feet studio where he films his movies.

But, his journey wasn’t easy.

Tyler Perry was born Emmitt R. Perry, Jr.  His carpenter father was physically and verbally abusive.  In an Ebony interview in 2004, he said:

The things that I went through as a kid were horrendous.  And I carried that into my adult life.  I didn’t have a catharsis for my childhood pain, most of us don’t, and until I learned how to forgive those people and let it go, I was unhappy.

As a teenager, he attempted suicide and dropped out of high school at age 16.  Eventually, he got his GED.

In 1991, he moved to Atlanta where he was a bill collector.  He saved $12,000 to rent a theater to produce his first play I Know I’ve Been Changed (named after an old Negro spiritual).  It is a gospel musical about two adult survivors of child abuse.  Only 30 people came to see it.  For the next eight years, he was broke, frequently homeless, and living in his car:

After the show, every person who had told me no, every promoter who had turned me down, came to me with an offer.

How did he do it?  Like most of us, he watched Oprah and learned how to find catharsis in his journal:

I was watching the Oprah show one day and she said that it’s cathartic to write things down, so I started writing down the stuff that was happening to me. . .That’s how my first play started, which features a character who confronts an abuser, forgives him and moves on.

From playwright August Wilson, he learned:

Do what you do.  Don’t worry about these people, do what you do because I don’t think it’s bad at all. 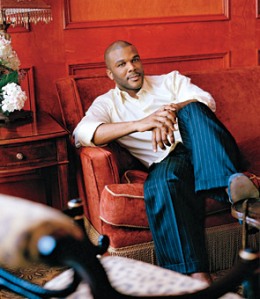 Like Oprah, Tyler Perry refuses to play by Hollywood’s rules.  They both demand creative control and ownership of their projects.  It is their key to building wealth.

Today, Tyler Perry lives in a grand 16,000 square feet palace 25 minutes outside Atlanta called “Avec Chateau” which is French for “with home:”

I wanted to make a statement. . .to let people know what God can do when you believe. . .if there was an opposite of homelessness, I wanted to find it.

Tyler Perry and Oprah are the executive producers of Precious which was adapted from Sapphire’s novel Push.  It is about an illiterate Black girl who learns to thrive and find joy after experiencing poverty and sexual and mental abuse.  It will open in theaters on November 6, 2009.  The movie won the grand jury prize at the Sundance Film Festival.

Happy Birthday, Tyler Perry!  Thanks for the uplifting messages, belly laughs, and inspiration.

Note:  Sadly, Tyler Perry’s mother Willie Maxine Perry passed away on December 8, 2009.  She was the basis for Mr. Perry’s character Madea.  She worked as a pre-school teacher in New Orleans, LA.

Sense of Humor: Get Yourself Some Madea Going On
Review:  Tyler Perry’s Madea’s Big Happy Family in Seattle
Tyler Perry:  “It’s going to be all right.”

5 responses to “Happy 40th Birthday, Tyler Perry: I Can Do Bad All by Myself”