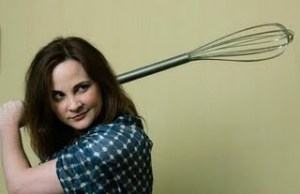 I’m not a cook.  Truth be told, I don’t much like to eat.  But, I am very much inspired by Julie Powell and Julia Child.

A million years ago, I bought one of Julia Child’s cookbooks, but I quickly discovered I didn’t care enough about food to tackle her recipes.  So, I gave it to the judge’s son’s Oriental girlfriend to take back home after her tour of the United States.

I read My Life in France by Julia Child and her grandnephew Alex Prud’homme several years ago because I was curious about her work for the OSS during World War II.  She and her husband Paul arrived in France a few weeks before I was born.  Their arrival in their Buick, “the Blue Flash,” was the first scene in the movie Julie & Julia.  The movie captured the essence of the Childs’ first apartment in Paris which they affectionately dubbed “Roo de Loo.”  My Life in France is loaded with photographs taken by Paul Child that help me appreciate the care Nora Ephron took with all the scenes in the movie.

While Stanley Tucci, who plays Paul, resembles him physically, the lack of chemistry with Meryl Streep was palpable in the movie.  Their romantic scenes in particular were so lacking in credibility that I found it distracting.  I thought it was curiously prescient that Julie Powell had mentioned both actors in her book Julie & Julia. 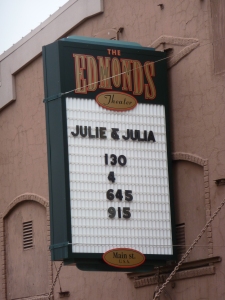 If you haven’t yet seen the movie, my recommendation would be to wait for the DVD.  I think it would be absolutely delightful to watch the movie at home while sipping a marvelous glass of wine and cooking up something fabulous for dinner.

While the first part of the movie was hilarious, it started to drag after the bit about killing lobsters.  I was touched to see how much pain Julia Child experienced because she never had children.

My favorite scene in the movie, however, is Julia (Meryl Streep) chopping a mountain of onions to master the art.  A clip of it is featured in a Nightline interview of Julie Powell which I highly recommend watching because it includes most of the movie’s best scenes.  It also features Julie Powell making the infamous boeuf bourguignon in her own Queens, NY kitchen (which she says in an August 5 blog post was about 100 degrees) as well as hilarious clips from The French Chef.

I rarely see movies in the theater anymore, but it was time for an artist’s date.  I wanted to see Julie & Julia because I’m a huge fan of Nora Ephron and Meryl Streep.  I was intrigued by the connections to Heartburn which was all about food and Ms. Ephron’s ex-husband Carl Bernstein’s affair with her friend Margaret Jay.  The key lime pie scene was a classic.

On the eve of the celebration of women’s suffrage, I think it is important to mention how we all need to support movies with rich roles for female actors ~ especially those directed by women.

I was impressed by how much unbelievably hard work, discipline, and dedication Julie and Julia invested in their passion for cooking and writing.  In My Life in France, Julia Child describes finishing her manuscript in 1970:

I was so busy there wasn’t even time to pee!

It reminded me of the pressure-cooker atmosphere of practicing law.

Julie Powell in Julie & Julia was more wistful about her quest:

Julia taught me what it takes to find your way in the world.  It’s not what I thought it was.  I thought it was all about ~ I don’t know, confidence or will or luck.  Those are all some good things to have, no question.  But there’s something else, something that these things grow out of.

. . .Julia Child began learning to cook because she wanted to share good food with her husband, because she’d fallen in love with great food late but hard, because she was in Paris, because she didn’t know what else to do with herself.  She was thirty-seven years old.  She’d found love, and it was divine.  She’d learned to eat. . .it wasn’t enough. . .

I thought I was using the Book to learn to cook French food, but really I was learning to sniff out the secret doors of possibility.

Julia Child, who grew up in an affluent Pasadena, CA family with hired cooks in the kitchen, taught “servantless American cooks” the art of French cooking.  From Julie and Julia, I learned that joy comes from being so passionate about something that we master it.

What are you so passionate about that you would dedicate a year of your life to master it?