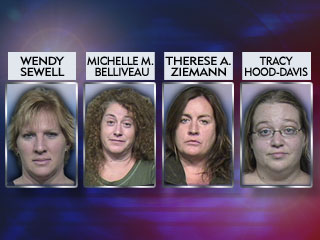 Reporters must not read Fern Michaels’ books.  Her Revenge of the Sisterhood series includes Free Fall in which Yoko Akia finally holds Michael Lyons, her billionaire movie-star father, accountable for her mother Suki’s death.  Yoko’s destitute Asian grandparents were conned into selling their beautiful daughter Suki to Lyons, who promised to love, honor, and respect her.

He was actually running a prostitution ring for the benefit of his wealthy, powerful, perverted friends.  The women were treated like slaves and discarded like trash when they became pregnant or the men became bored.

The Ladies of Pinewood hacked into Lyons computer fortress to flush out the names of his clients, outed them all, and emptied their bank accounts.  Like rats, the men scurried off to California to meet with Lyons.  That’s when the Ladies trapped the rats, forced them to strip naked, and used a vat of Krazy Glue to hold them hostage and do damage to their privates.

It’s too bad the Krazy Glue vigilantes involved in a lovers quadrangle in Wisconsin didn’t take the ending of the book seriously.  The Ladies of Pinewood were caught in the act, arrested, and fled the country to avoid prosecution.

The Wisconsin story has the media tittering and using bad cliches, but it isn’t funny.

It’s hard to distinguish between victims and perpetrators.  Apparently, 36-year-0ld Donessa T. Davis, Sr., had an active love life which ended when his estranged wife Tracy Hood-Davis ratted him out to his lovers (Wendy Sewell and Therese Ziemann) and told them he had been using them for money.

Like the Ladies of Pinewood, they lured him to a Stockbridge, Wisconsin motel room, tied him up, stripped him, and glued his privates to his leg.   Therese’s sister Michelle Bellieveau went along to support Therese, who had been fleeced out of $3,000 by Davis and conned into paying for the motel room where she and Davis had their trysts. 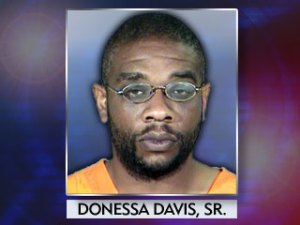 Today, Davis was charged with felony child abuse, theft of the urn containing his wife’s father’s ashes, unlawful phone use, and harassment with a death threat in a domestic violence investigation.

AOL News, Fox11 in Fond du Lac, and the Green Bay, Wisconsin NBC affiliate report that Davis beat one of his twin daughters and told her “God I hate you” when he learned she had ratted him out to her mother about having one of his lovers present during their visitations.  He admitted discussing his plans to murder his wife with Theresa Ziemann, one of his lovers.

His plan was to ambush his wife while she and their daughter were delivering newspapers.  He would ram her car off the road, drag her out of the car,  and “bash her with a rock.”  He also planned to take out a $1 million life insurance policy on his wife.  He bragged that he had a friend who was sharp-shooter and a veteran of Iraq.  This man would wound Davis and kill his wife.  His plan’s only flaw was that now that Theresa knew it that he “would have to kill her too.”

Tracy Hood-Davis, his estraged wife has asked for a restraining order.  The criminal complaint says she hasn’t been living in her home because she is afraid to be there.  She discovered that three lug nuts on her car had been loosened.  The complaint indicates Davis had made over 50 phone calls and text messages to Tracy.  She saved the voice mail messages so the police could hear them.

Davis has was charged with repeated sexual assault of a child in 2006, and he has been convicted of battery.  Another woman got three consecutive two-year restraining orders against Davis.

Final chapter:  Fox 11  reported the ladies were sentenced by Judge Donald Poppy on February 2, 2010.  None will serve jail time.  Each was sentenced to one year probation with community service.  The judge said the sentence of public shame and scrutiny was enough to deter future actions.  Traci Hood-Davis took her husband back.