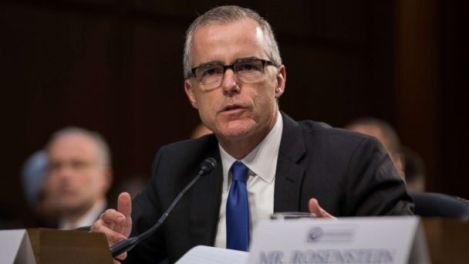 Why?  Why were there so many connections between Russia and the Trump campaign?  Why have there been so many attempts to cover it up?  Why do Trump’s behavior, actions, and statements point to a special affinity toward Russia?

Why?  It has been a question under FBI investigation since 2015 when counterintelligence officials first became concerned about Russia’s meddling into our elections.  The investigation was expanded into the Trump campaign on July 31, 2016 after a series of links to Russia emerged.  It mushroomed into the Mueller investigation when a series of odd and curious events with no rational, tactical, or diplomatic explanation were engaged in by the Trump administration.

Two questions should chill every American citizen:  Is Trump guilty of the crime of obstruction of justice?  Is Trump a threat to national security?

In a letter to Rod Rosenstein citing reasons FBI Director Jim Comey should be terminated, Trump cited Comey’s failure to fire the FBI’s Andrew G. McCabe.  This happened months before the Investigator General delivered on Trump’s long-standing demand via Tweet for McCabe’s head.  He was fired hours before he would have become eligible for his pension.  Retaliation?

It is meaningless to be called a liar by the most prolific liar I have ever encountered. . .Donald Trump. . .does not know what democracy means.

Has any president done more
to undermine democracy than this one?
– Andrew McCabe, The Threat

Why is Trump apoplectic about McCabe?  Early in his FBI career, McCabe was part of the team which created the FBI’s protocol on investigating the Russian mob.  McCabe had expertise in counter-intelligence.  McCabe has the integrity to speak truth to power, and Trump perceives him to be a threat to his dreams of becoming America’s first dictator.

I rarely buy books anymore, but I braved ice-packed sidewalks to buy McCabe’s book The Threat:  How the FBI Protects America in the Age of Terror and Trump. I read it in less than a day.  It is exceptionally well-written but suffers from information he was prevented from sharing due to the Justice department’s national security concerns.

Fortunately, McCabe was able to say quite a lot in a series of press interviews.  Nicolle Wallace’s interview on Deadline:  White House was “stunningly good.”  She frequently asks why a “band that can’t shoot straight” are all telling the same lie.  Good question.  McCabe has opined that Trump’s loyalty demands are classic criminal enterprise behavior which are the architecture of classic RICO investigations.  He artfully explains the dynamic in his book.

Ms. Wallace did us all a favor by creating a “9 Days in May” timeline of events which had the FBI asking whether Trump engaged in the crime of obstruction of justice and whether Trump might possibly be a Russian agent:

May 11:  Lester Holt’s interview where Trump admitted “Russia” was the reason Comey was fired; the New York Times published an investigative report revealing Trump’s demand for Comey’s loyalty which the FBI interpreted as an overt effort to “put his thumb” on the long-standing Russia investigation

May 12:  Trump’s tweet about how Comey “better hope” there are no tapes

May 15:  Trump met privately in the Oval office with the Russian foreign minister and ambassador, revealed highly classified information, and assured them Comey’s firing “relieved pressure” on the Russia investigation

May 16:  NYT reported that Trump pressured Comey to end the investigation into Michael Flynn

May 17:  Robert Mueller was appointed special counsel to oversee the long-standing Russia investigation as well as matters related to the Trump campaign and administration, obstruction of justice, and threats to national security

As I finished reading the book, the news of Mueller’s memo on Paul Manafort’s sentencing broke.  I was intrigued to learn that the judge wondered why Manafort would opt for prison over telling the truth about Russia.  Is he expecting a pardon from Trump as a reward for his silence?

McCabe’s Interview with Ari Melber (The Beat with Air Melber, 2/21/19)