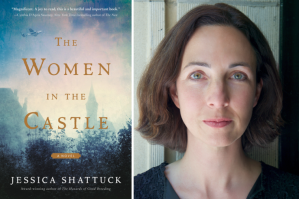 How did Hitler manage to con millions of Germans?  This question has plagued me for over six decades and is echoed in my current bewilderment with Trump supporters.  I found the answers in Jessica Shattuck’s brilliantly researched and written The Women in the Castle.  Before she picked up her pen to write the book, she interviewed scores of German survivors of World War II.  The book is about a trio of war widows.  Ania Grabarek was married to a Nazi.  Marianne von Lingenfels and Benita Fledermann’s husbands were part of the resistance movement.  They were hanged after their plot to assassinate Adolf Hitler failed. 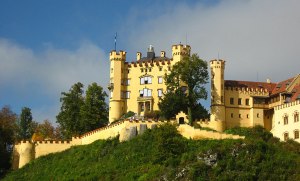 Marianne is an intellectual feminist.  Her late husband Albrecht’s family owned a decaying castle, Burg Lingenfels, in Germany.  She promised him that she would protect and shelter the wives and children of his resistance movement compatriots.  The story starts at a harvest party hosted by the eccentric, elderly Countess von Lingenfels on November 9, 1938.  Martin Constantine (Connie) Fledermann was one of the guests, and his pregnant, peasant fiance Benita made her debut at the party.  Marianne was jealous and took an instant dislike.

After hearing the news of Kristallnacht, the men decamped to Albrecht’s study.  Connie was enraged:

If we don’t work actively to defeat Hitler, it will only get worse.  This man ~ this zealot who calls himself our leader ~ will ruin everything we have achieved as a united nation.

. . .We must find ways to work against him.  Not only to bring the attention of the world to his ugly aspirations, but to take action ourselves.  If we sit by and judge from behind the safety of our desks, we will have only ourselves to blame.  So I suggest we commit to active resistance from this day forward.  To trying to steer our country from Hitler’s destructive path. 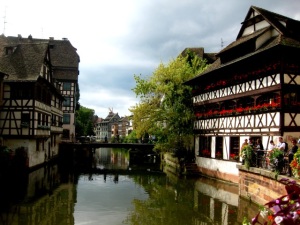 You are appointed the commander of wives and children.
She knew [Connie] didn’t mean to belittle her, but
it smarted like a slap.
Jessica Shattuck, The Women in the Castle

Benita’s son was named for his father.  The SS took the boy to the Children’s Home in Thuringia and changed his name to Martin Schmidt.  He and Liesel Stravitsky were the last two children to be claimed from the home after the war ended.  On the trip to Berlin, Marianne told young Martin that his father had been hanged.  She didn’t tell him it was from a meat hook.  Marianne found Benita living with a Russian soldier in Berlin.

When they returned to Burg Lingenfels, U.S. Lt. Peterman helped Marianne locate the wives and children of the resisters.  He brought Franz Muller, a Nazi prisoner of war, to the castle to work as slave labor. 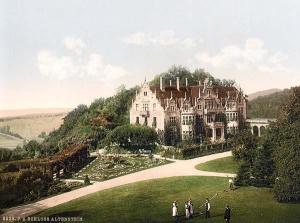 Lt. Peterman located Ania Grabarek and her sons.  Marianne didn’t recognize the name, and presumed Ania’s husband Pietre was a member of the resistance.  Marianne rescued them from the Tollingen Displaced Persons Camp and brought them to the castle.  Fortunately, Ania was a good and resourceful cook.  She wasn’t, however, honest about her true identity or past.

Life at the castle was grim.  There wasn’t enough food to eat, no running water or heat, and most of the rooms were not habitable.  It became dire when Russian soldiers descended on the castle.  After the starving soldiers ate the soup Ania prepared, they demanded meat.  They had seen Gilda, an ancient horse owned by the neighboring farmer Carsten Kellerman, and wanted to eat her.  The description of the final moments of Gilda’s life is horrific.  The terrified women and children spent the night in the castle’s cellar while the soldiers got drunk on schnapps. 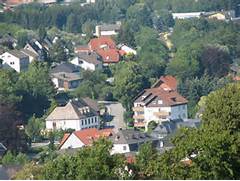 You did what you had to do to survive.
Jessica Shattuck, The Women in the Castle

The next morning Benita heard Franz’ ax chopping wood and rushed to warn him about the Russian soldiers.  She was too late.  When the soldier called her a whore:

Benita felt something inside her explode and this man, advancing on her now, became not just the prisoner who had reached Herr Muller before she could, but every other man who had ever called her a whore.  Every man who had ever pummeled and beaten and clawed his way into her with stinking breath and rancid sweat and rage about things for which her body had no responsibility. . .She was nothing but a lump of flesh to be tossed between fighting dogs.  She was half-dead already, torn up, chewed on, spat out.  This was how he saw her.  She could see it in his eyes.

. . .With a torrent of fury sweeping through her veins, she reached into her pocket for the knife.

Yep.  She killed him.  Franz buried him.  The Russians left, and Franz was sent to a POW camp.  On Christmas Eve, 1945, the boys went to the camp to see him.  Martin gave Franz half of a candy bar and a tin of cheese.  Ania’s son asked him if he knew a prisoner named Brandt. 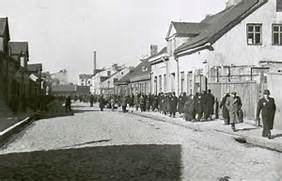 Jewish prisoners at Warthegau, Germany where Rainer Brandt was assigned to lead a lager

Hitler had duped them all with his promises of
cars and jobs and self-respect.
Connie had been right to hate him from the start.
-Jesica Shattuck, The Women in the Castle

Five years later, Benita and Marianne were living in a flat in Tollingen.  Ania married Carsten Kellerman so that her sons could inherit his farm.  And, Benita was sneaking off to Momsen to see her lover Franz Muller.  He had reunited with his father and his daughter Clotilde, and he used his carpentry skills to make coffins.

Ania got pregnant and received a letter from Rainer Brandt, her Nazi husband who had been reported as missing and presumed dead.  The next month the gravely ill Rainer came to the Kellerman farm.  Her sons carried him to the castle and brought him food.  A month later, Ania gave birth to a baby girl.  Benita named her Marianne.  Before Rainer died a couple of months later, the elder Marianne discovered Ania’s betrayal. 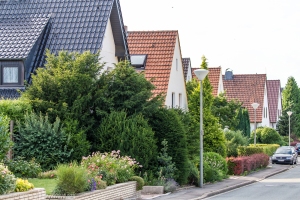 Ania’s father was a doctor.  Rainer’s father was a bricklayer and a patient of Doktor Fortzmann.  Ania and Rainer fell for Hitler’s “strength though joy” pitch and joined the Nazi party.  The couple eloped at city hall and were assigned to lead a lager, a troop of Nazi boys.  Six years later, Rainer was called to the front, was wounded in battle, and was discharged from the military.  He was assigned to Warthegau where Ania could no longer ignore the horrors of Nazi Germany.  She packed up her sons and a few meager belongings, became a displaced person, and changed her name to Mrs. Pietre Grabarek. 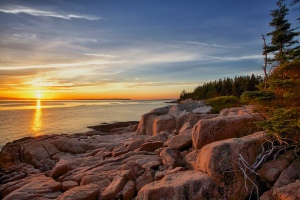 Marianne and her daughters ultimately immigrated to the United States. Martin became a professor at an American university. Mary Kellerman became an attorney and bought a Victorian house in Cambridge, Massachusetts after her divorce.  Ania visited her daughter there.  The Kellerman farm couldn’t compete with corporate farms in Germany, and it was sold.

The castle was given to the Falkenberg Institute and renovated.  In 1991, the widows and children reunited at the castle for the launch of a biography about Marianne.  Early in the morning, Ania sat outside the castle and reflected on her life:

Germany has become the agricultural wonder Hitler always imagined, every meter planted with crops or windmills or endless flats of solar panels that stretch out alongside the highways.  No scrap of wasted space.  Even the patches of woods serve as sound barriers to shield towns against the roar of the autobahn, or screens to mask gravel mines or irrigation.

. . .These woods are where she and her boys buried Rainer. . .Ania felt nothing but relief.  He was no longer her husband but her secret, a man who had made the wrong choice at every turn.  And she had made her own bad choice in him.  He was the second great mistake of her life.  Her first was believing in Hitler. . .

Hitler always said there were too many people on earth.  Too many people in Germany ~ such a small country, so many people. . .But then of course it turned out his answer to this was not a solution, but a symptom of the disease.  He was the rat in the maze that begins to eat the others. . .

I did so many things wrong.  I lived my life wrong. . .This is what Ania will pay for:  not only her inaction, but her self-deception, for narrating away evil while staring it in the face. 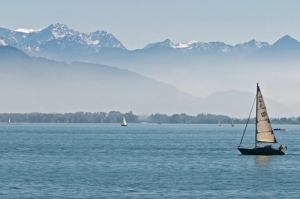 Marianne shared her own regrets at the book launch:

You would think from this introduction that I must be a very wonderful person.  And that I must have answers and secrets of how to be good and. . .how to see evil and resist it. . .

How grateful she had been to have Ania beside her ~ a fellow adult and human being, connected not through allegiance to any group or party or particular way of thinking but through the next hours, the next day, and the one afterward, and through their shared determination to keep their children safe.

It is the great regret of her life that she lost this ~ no, that she forsook it.  And that she lost Benita too ~ her sweet, flawed friend, fellow widow and human being, whom Marianne can see now that she. . .betrayed.

After a farewell breakfast at the castle, Martin visited his childhood friend Liesel in Hamburg.  She is divorced with two grown children.  Meanwhile, Clotilde Muller, who became a gardener and never married, tended the grave of the Russian soldier buried in the castle woods:  Fyodor Ivanov. 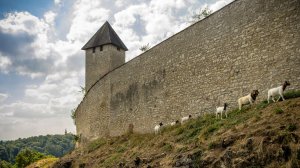 Castle Burglengfeld might have been the author’s inspiration for the castle in the book.

The Women in the Castle is the most powerful book I’ve read in a very long time.  The reflections of Marianne and Ania illuminated my own blindspots and mirrored the political divide in the U.S.  My hope is that the book will inspire readers to ponder how we might collectively bridge the divide.