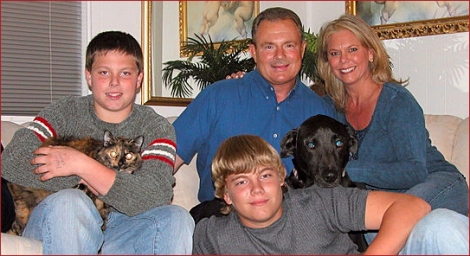 Brian Blair was arrested for beating up his sons on Father’s Day.  Blair is a former pro-wrestler and Republican politician who claimed to be a champion of family values.  In a letter to campaign supporters on his web site, he lists as an important accomplishments:

We continue our efforts to protect the safety and security of our most vulnerable citizens – children and seniors.

Blair is described as 6 feet tall and weighing 235 pounds.  He says he has “over 7,000 hours mentoring children, and the last thing that I’d ever do is hurt a kid.”  But, the Tampa Tribune reports:

According to an arrest report, Blair pushed his 17-year-old son, Brett, in the chest at the family’s home shortly before 4 a.m. When the boy tried to walk away, Blair grabbed him, punched him in the face and put him in a chokehold, making it difficult for his son to breathe.

Then Blair turned his attention to his younger son, Bradley. He grabbed the boy by the throat, the report states, and punched him in the head, leaving a mark. Bradley is listed as being 13 on Blair’s campaign Web site, although the Hillsborough County Sheriff’s Office report filed after Blair’s arrest Sunday says he is 12.

The arrest report does not say what sparked the confrontation.

My radar always goes up when a politician says domestic violence is “an intolerable and horrible crime,” but votes against funding for a domestic violence center.  Blair was investigated for beating up a former girlfriend in 1984:

Blair was accused of throwing the woman over a couch, striking her 10 to 12 times in the head and face, then pulling out a patch of her hair. The sheriff’s office listed the case as active for more than a month.

This is why I adhere to the old Oriental adage:  “Your actions speak so loudly that I can’t hear what you are saying.”

Blair was released from jail without bail by Circuit Judge Walter “Buzzy” Heinrich, who is leaving it up to the welfare folks whether Blair will be allowed to see his kids.  Blair’s attorney George Lorenzo claims, “the children are doing great.”  Right.