Y’all know how much I love Sophie Littlefield‘s books (A Bad Day for Sorry and A Bad Day for Pretty).  She’s done it again with The Dress in the Window which she wrote under the pen name Sofia Grant.  A Singer sewing machine and fabric remain as central characters in a book inspired by her mother’s expertise and legacy as a seamstress:

I intuited that proof of her love for us could be found in the hours she spent hunched over her Singer. 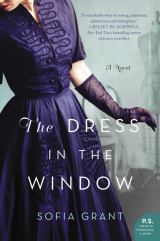 A man sees no value in a woman’s work until
he can charge someone else double for it.
Sofia Grant, The Dress in the Window

The story begins during the month I was born (November, 1948) and plants the seeds of the women’s liberation movement which was in full-swing when I began my career in the 1970s.  Jeanne Brink and Peggy Holliman are sisters.  Their late father Leo Brink owned a prosperous woolen mill which died when he did in 1939.  Jeanne lost her fiance Charles, a medic, during World War II.  Peggy’s husband Thomas was also killed.  The sisters lived with Thelma Holliman, who is Peggy’s widowed mother-in-law, and Peggy’s precocious and somewhat neglected daughter Tommie in a suburb of Philadelphia.

In dire financial straights, the trio open a modest home-based business creating couture-quality dresses for local women.  Jeanne is a talented seamstress.  Peggy is a brilliant designer, and Thelma does the books.  Alas, their combined talents and hard work weren’t enough to pull them from post-war poverty back to pre-war prosperity.

Jeanne gets a typist job at Harris Carton in the city.  On a lark, Peggy applies for a job fetching couture dresses for the mythical Miss Perkins at Fyfe Department store’s Crystal Salon.  Their sibling rivalry heats up when Gladys Harris, who is married to the Harris family scion, turns to Jeanne for help with her wardrobe.

Gladys introduces Jeanne to her mother-in-law Virginia, who asks Jeanne to re-design an ugly dress she is slated to model at a Junior League fashion show.  On a visit to the Harris family mansion, Jeanne first meets Anthony Salvatici.  Sparks fly!

Meanwhile, Peggy’s fashion talent is noticed by Miss Perkins.  The sibling rivalry escalates when Jeanne steals one of Peggy’s designs, and Peggy gets promoted.  Peggy loves her job which doesn’t pay much and finds herself in the career vs. childcare bind which faces most single mothers.  She resents the fact that neither Jeanne or Thelma take her talent or career seriously.

The plot thickens with simmering secrets which plague women:  rape, sexual harassment, abortion, domestic violence, and affairs with married men.  Thelma’s secrets boil over when she decides she’s done cooking, cleaning, and babysitting for everyone else.  She leverages two of her secrets to “persuade” Leo’s brother Frank to re-open Brink’s Mill:

We all had our burdens.  You just made the mistake of thinking that yours mattered more than everyone else’s.

Ouch!  Frank, Thelma, and Jeanne very successfully manufacture synthetic blends which became popular with housewives during the post-WWII boom.  Peggy is propelled on a parallel path after Mrs. Harris discovers Peggy’s design talent.  She persuades Fyfe’s to market Peggy Parker ready-to-wear fashions which are a huge hit with housewives.

Housewives in post-WWII America yearned to be as glamorous as Grace Kelly, who wore this beautiful dress in Rear Window. Women who could create high fashion on a budget were the envy of neighbors, family, and friends.

Peggy’s secret causes a rift in the trio, and she is banished to New York City where her career flourishes.  Jeanne becomes Tommie’s guardian with a weekend assist from Thelma.  Peggy meets Dr. Daniel Griffin, who has no idea she is a war widow with a child.

No, I’m not going to tell you how the love stories end.

All three women leveraged their talents and strengths to surmount life’s disappointments and difficulties and to carve out paths for themselves.  The Dress in the Window is a lusciously crafted book that I couldn’t put down and a triumph for Ms. Littlefield.  It ended with Thelma’s final blessing for Jeanne and Peggy:

I just want you girls to promise me that you won’t doubt yourselves.  Just take what you deserve from life.