Ginny Nicarthy, author of Getting Free:  You Can End Abuse and Take Back Your Life and You can Be Free:  An Easy-to-Read Handbook for Abused Women, kicked off L.Y. Marlow’s  Saving Promise 10-city national “Gotta Talk About It” rally in Seattle on October 30 at Northgate Mall.  Ms. Nicarthy founded Rape Relief in Seattle in 1972.  Six years later she founded Abused Women’s Network.

The crowd was spell-bound as L.Y. Marlow read from her award-winning book Color Me Butterfly.  She chose the story about her grandfather Rollie being forced to eat a fried rat by her great-grandfather Isaac because three-year-old Rollie had wet the bed.  Although many people in the audience were survivors of child abuse, everyone’s jaws dropped as they listened:

He tossed the rat onto a plate and shoved it at Rollie.

“Eat it!” he said, daring Rollie to disobey.

Eloise and the other children looked aghast:  in the silence, they could hear the rat’s skin still sizzling. . .

Rollie cried helplessly; though he was too young to fully understand what was happening to him, he understood one thing ~ he had just watched his father skin the very thing that scared him as it scurried across the bedroom floor each night.  The look in Isaac’s eyes left no doubt as to what would happen should he disobey.  Rollie picked up the rat and bit at its flesh.

L.Y.’s own grand-daughter Promise was just six months old when she witnessed her mother Treasure (L.Y.’s daughter) being abused.  L.Y. founded Saving Promise the next day:

I have vowed to make sure Promise does not become the 5th generation of victims.

We need to raise the bar.  We need to get beyond the secrecy and shame.  I have decided it is time to achieve real change.

Mr. Grove opined, “the community needs to look at domestic violence as a collective problem.”

Betsy Ann said we need to place “more focus on the perpetrator and less on the victim.”

Mary G. called on us to “be there for someone trying to leave.”

Mr. Henkens is a small business owner who raises funds and awareness on behalf of the Eastside Domestic Violence Program in Bellevue:

The community needs to step up and fill the gap that is ignored by politicians. . .the media looks at it as a family issue rather than as a public health issue. . .Men of quality treat women with equality.

Our solutions to societal problems often entail violence.  We need to solve problems rather than control [people].  80% of homeless women are DV survivors. 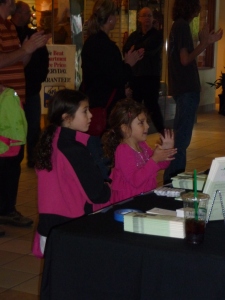 I was very touched that fathers brought their young daughters to teach them that they deserve to be treated with love and respect.

This little guy’s sober expression touched my heart.  His father is teaching him early to be a gentle-man. 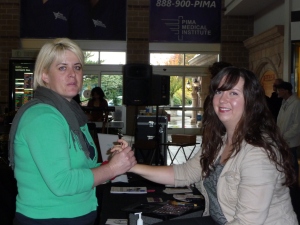 Survivors were treated to hand massages by Beauty Empower.

Carolyn Scott Brown, Director of Educational Resources at the Faith Trust Institute,  observed that the Saving Promise rally was a catalyst for change.  She noticed that everyone who is working to empower those who experience domestic violence had been brought together by the rally to create synergy for new solutions.  In response to a question from the audience about faith-based solutions she said:

Scripture has been misinterpreted.  Women are told [by clergy] to “go home and pray about it.”

Then, she shared a scene from Broken Vows about a preacher who didn’t beat his wife on Sundays. 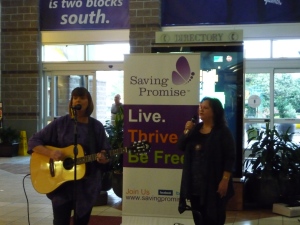 Karen Foley and Cynthia Obtinario brought a moving, empowering, and memorable afternoon to a close.  They sang “Do You Know” which was written by Ms. Foley.  They perform this amazing duet to close each Survivors’ Day in Washington State.

Thank you and bravo to everyone who attended and participated.  We made her-story on Saturday in Seattle.

I’d like to give a special shout-out to Jimm Brown at KOMO TV (ABC affiliate in Seattle).  He received a 2010 Take Action Award and went the extra mile again for domestic violence survivors by asking his colleagues at KOMO radio to publicize the Saving Promise rally.  Mr. Brown, you are my hero and a prince of a man!